Wow, what a big surprise and honor!

Last Friday, Chris Coyier of the popular web design community CSS-Tricks (who states to have about 1.6 million pageviews per month, 40.000 RSS subscriptions) featured my hoverFlow plugin in a dedicated screencast. I mean, I was used to see some mentions on bookmarking sites or short reviews, but we are talking about an almost 20 (!) minute top quality video here. 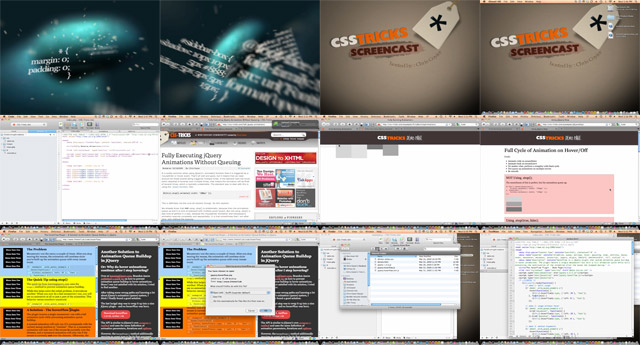 Back in December, Chris already wrote an article called Fully Executing jQuery Animations Without Queuing. He tried different approaches and came up with a first solution. I replied and pointed him to my hoverFlow plugin. He seemed to like it and added a link to his article. Mission completed, I thought, and forgot about it.

When you use jQuery’s .animate() function with something like a hover event, those animations will “queue up”. That is, if you hover multiple times, that animation will fire multiple times. The classic method to prevent this is to throw in a .stop() before the animation, but I find this abrupt and not ideal, because it prevents the animation from completing a full cycle. In this screencast we’ll look at a few attempts at solving this and ultimately using a plugin that does a great job.

The screencast is really worth a look. Chris not only explains the problem and finally integrates hoverFlow into a demo site, he also has a lot of fun doing so. You can see him unsuccessfully pasting hex colors from Adobe’s kuler application, exclaiming a lot of “Oohs” and “Aahs” when describing the beauty of animations, and finally moaning about missing ads for his screencast.

Well done, Chris, and thank you very much!